Common flourishes thanks to youth

Common flourishes thanks to youth

Spring activities are all a buzz at the ­corner of Chambers and Gladstone in ­Fernwood-and it’s not all about the cherry blossom bustle. It is in large part due to the ­talented, dedicated, next ­generation of youth who are putting their heads together to flex their green thumbs and revive the ­common!

Over the month of March, Spring Ridge Common has seen some significant improvements. Amongst the upgrades, the food forest has been given a brand new tool shed and new ­irrigation system, both of which were installed almost entirely by volunteer efforts! Over the course of the month, there were 45 ­different ­volunteers-from the Greater ­Victoria Green Team, Vic High School and/or residents-who are helping ­revitalize their community food forest. 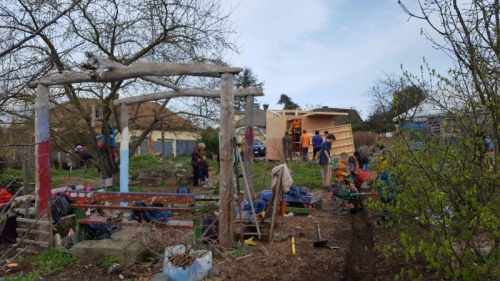 The Greater Victoria Green Team, in ­collaboration with Spring Ridge ­Common’s Garden Volunteer ­Coordinator, organized a line-digging for irrigation party in the ­Common. On March 15th, students and teachers from Oak and Orca ­Bioregional School ­participated and helped to dig a big irrigation ditch. In total, 21 ­volunteers participated ­including 15 students and ­contributed 58 ­volunteer hours. The ­students ­managed to help with an ­assortment of tasks in the ­common ­including: digging an irrigation ditch, ­planting snowdrop flowers, ­planting native plant seeds and digging up berry bushes that are to be planted elsewhere in the garden. Another 16 volunteers joined in on March 18th to finish the irrigation project. There were 16 volunteers who participated and contributed 42 ­volunteer hours in total. Of those volunteers, six came from ­Victoria, four from Saanich, three from Central ­Saanich, two from Oak Bay and one from Esquimalt-in addition, 12 of the 16 ­volunteers had never been to Spring Ridge Common before! Thanks to the team, a main irrigation line now ­connects the water to 4 “quadrants” with spray ­nozzles which will help distribute hydration to each corner of Spring Ridge in the very dry summer months!

In thanks to the seven stellar student champs of the Victoria High School ­Carpentry Class who helped design and construct the 10 x 10 tool shed, the garden now has a place for volunteers to use and store tools! The project is still underway to finalize the finishing touches.

Thank you to the City of Victoria’s ‘My Great Neighbourhood Grant,’ for ­funding the irrigation system and tool shed at Spring Ridge Common.

Interested in becoming a volunteer? Do you have gently used garden tools that you would like to donate to Spring Ridge Common? Email foodforestry@fernwoodnrg.ca and look out for more monthly work parties with The Greater Victoria Green Team.

A letter from Fernwood NRG

A letter from our board chair