Those of you who passed through the intersection of North Park Street and Cook Street in October might have been pleasantly surprised to see the beginning stages of an expansive mural encompassing the Women In Need Resale Shop (WIN) and Logan’s Pub buildings. Now that we’ve seen the finished product, it’s quite a remarkable contrast in terms of subject matter and scope, and has certainly got people’s attention.

The origins of the mural are linked to the new crosswalk installed by the City on Cook Street, which now allows for greater mobility between the Fernwood and North Park neighbourhoods. Jenny ­Farkas from the North Park ­Neighbourhood ­Association initiated the project, which originally took the form of an art piece on the crosswalk but later morphed into the recently completed mural.

“We’ve been doing a lot of thinking about revitalizing our little urban village,” says Farkas. “We identified this ­intersection as a natural hub of our neighbourhood,” she adds. It comes at a good time, as North Park is updating its local area plan in 2018, as will Fernwood. Her hope is that the ­project will spark an influx of public art to the intersection. “The idea is to get murals on all four corners to help identify it and give it a sense of place… Our little ­neighbourhood needs a boost right now, it’s so car-centric, so this is a real win for us,” says Farkas. 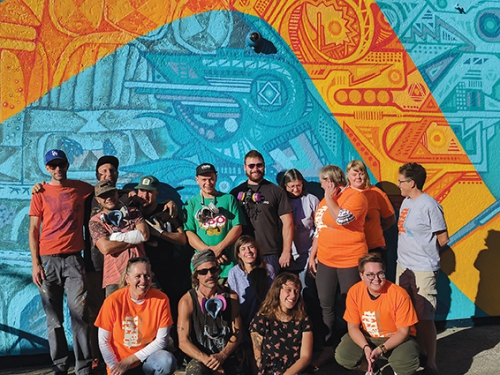 Luke Ramsey (top left), the City of Victoria’s Artist in Residence, with the crew of artists who created the Story Line mural and North Park ­Neighbourhood Association peeps. Photo courtesy of Luke Ramsey.

Farkas got in touch with Luke Ramsey, the City of Victoria’s Artist in Residence, and started the conversation about doing a mural.

“[Jenny] reached out to me, and wanted my input on some of the ideas that were coming up for public art in the ­neighbourhood, and she mentioned this notion of putting a mural on the WIN building,” says Ramsey. “With my ­artist in residency position I have a budget to pull from for public art projects, so I approached Jenny and said I was able to use some of my budget for this project, and proposed to her to make it a collaborative project with other artists.”

Ramsey then assembled a team of ten ­artists, eight based in Victoria (Kay ­Gallivan; Ali Khan; Sarah Jim; Kristofer Ray; Ian George; Jesse Campbell; ­Charlie Walker and Sam Sharp) and two from out of town; James Kirkpatrick from London, Ontario and Tyler Keeton ­Robbins from Kelowna, BC. All the artists involved ­represented ­different artistic background and styles, such as graffiti, folk art, ­printmaking, drawing and painting.

“Knowing I’d have resources to make public art, I thought about how easily it could be for me to just throw a good chunk of that money on raw materials… But then I thought about artists, and not ­thinking of artists as product, but thinking of ­artists as material, and thinking about their ­creativity, and using the money to enhance their abilities and bring people together from different backgrounds,” says Ramsey.

The project was completed over ten days in October—one day for prep and nine days of art—which happened to ­coincide with some good weather. Ramsey was in charge of keeping with a strict colour ­palette that was chosen by Farkas, which are representative of the colours used by the North Park Neighbourhood Association.

“To tie everybody’s work together, I was very specific on everyone keeping to that colour palette and just using the inversion of colours to connect to this line that is passing through everybody’s work,” says Ramsey.

That line in question is the orange line that runs throughout the entire mural—also know as the story line which is the title of the piece. The line is symbolic of the process of artistic collaboration, but also represents a larger concept of ­community engagement through public art and shared spaces. Ramsey referenced the line in the context of graffiti tagging, which would generally exclude someone else’s work, but in this case, the line is intended to pass through everybody’s work as a means of collaboration and inclusion.

“I really wanted to bring everyone together in that way, to show this story line, because in each neighbourhood or ­community, everybody as an individual has their own story, but as a collective whole. We become one. So, this mural is about that story line, and it’s about how the ­individual in the collaborative spirit can create this unity,” says Ramsey.

Farkas and Ramsey then worked with business owners from WIN and Logan’s to get their input on the content and subject matter of the mural.

“We asked that the art be kept abstract and overall reflect our vision of growth, empowerment, inclusiveness and ­positivity,” says Clare Yazganoglu, ­Executive ­Director at Victoria Women In Need Community Cooperative who ­operate the WIN Resale Shops. “The mural is really great—it feels joyful, welcoming and is a great starting point to having these vibrant colours reflected throughout the neighbourhood. It is a great opportunity to bring the ­neighbourhood together in a visual way,” she adds. Yazganoglu also spoke to the mural as being good for the Cook Street WIN, adding vibrancy to the store that’s been on the corner of North Park and Cook for the past 25 years.

“It was just about hearing everybody’s perspective, and what they wanted… Just being open eared to everybody in the neighbourhood, trying to make something we can all be happy with,” says Ramsey.

Over the duration of the project, Ramsey spoke highly of the community’s reception to the project. “We had ­hundreds of people coming by, and giving us props, and ­bringing us coffees, yelling out of ­windows and saying good things.” Of course, everyone is entitled to opinions on artistic preference, something that Ramsey is well aware of as an artist. Noting that one individual over the ten days reacted negatively towards the piece. “That’s fine,” says Ramsey. “I welcome critique on art. People aren’t tied up to opinion. If you say nothing to it, if it gives you no reaction, I think that’s the most offensive thing to a work of art.”

The mural has certainly livened up the busy corner dividing North Park and ­Fernwood, and will hopefully stand out as a centerpiece for more proposed public art in the neighbourhood.

“I think everyone gets it, that something like this can really infuse a lot of energy into a space, and then as we continue to build off of it, people will be really happy,” says Farkas.

“It was really fun for all of us to come together and feel like we were a family,” says Ramsey. “That’s the spirit of what this piece is about; it’s about the neighbourhood vibe, and everybody feeling like they own it, and feeling like they are a part of something.” Thanks to public art, City resources and community involvement; everyone that engages with the mural can hopefully feel that connection too.

10 ways to support the Gift of Good Food

Holiday Meal and programs at the Centre

The Unplugging, a play about connection and climate change at the Belfry