This month, in celebration of Earth Day, let’s talk about parks! We are fortunate to have so many parks in Victoria but in many neighbourhoods—including Fernwood & North Park—there aren’t nearly enough.

A 2020 study of four Canadian cities found that equity deserving neighbourhoods have less access to green space than more affluent neighbourhoods. North Park and Fernwood are equity deserving neighbourhoods. Many North Park and Fernwood residents live in the subsidized housing (31% and 11%), about half of residents spend more than a third of their income on shelter alone (52% and 47%), we have high proportions of renters (79%, and 66%), and 20% and 16% of residents identify as a visible minority (all 2016 census stats, see more maps here). 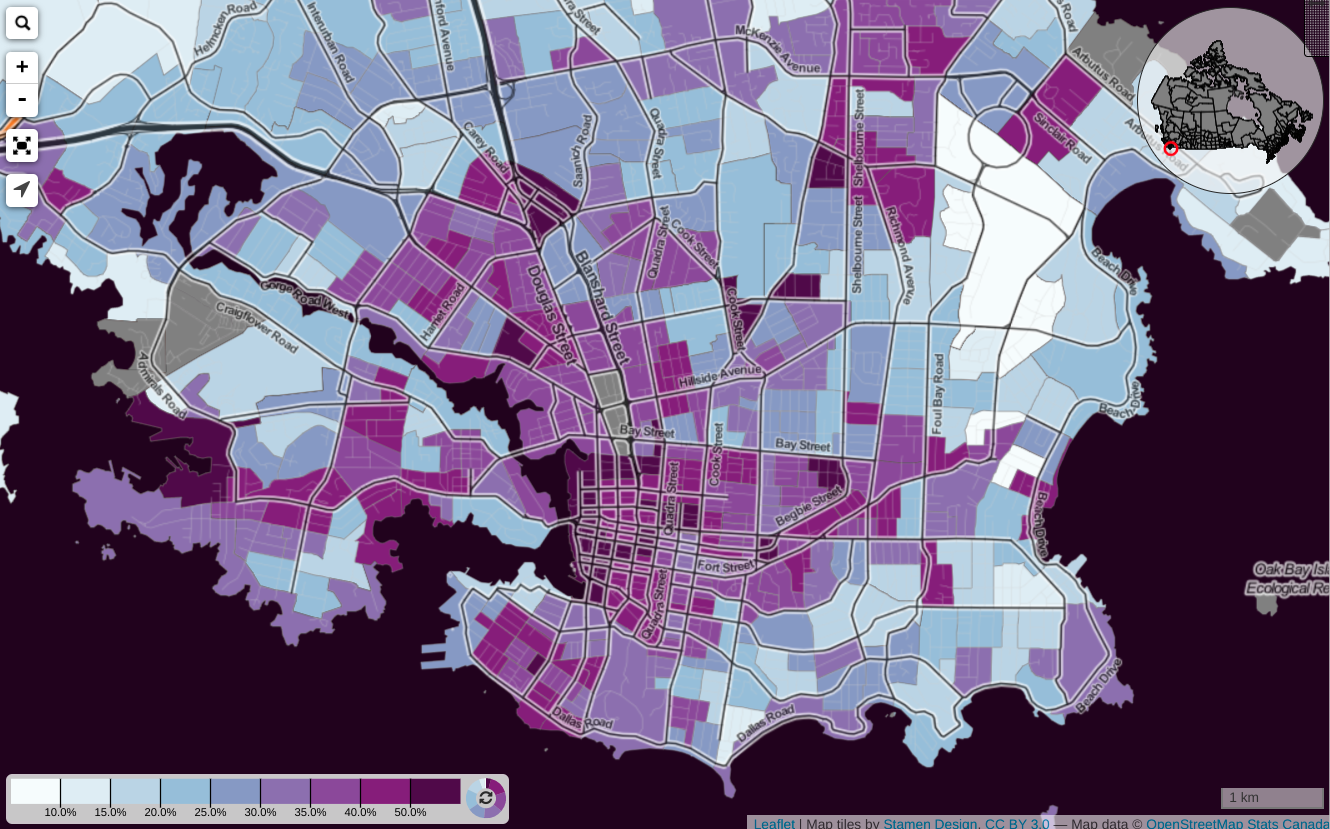 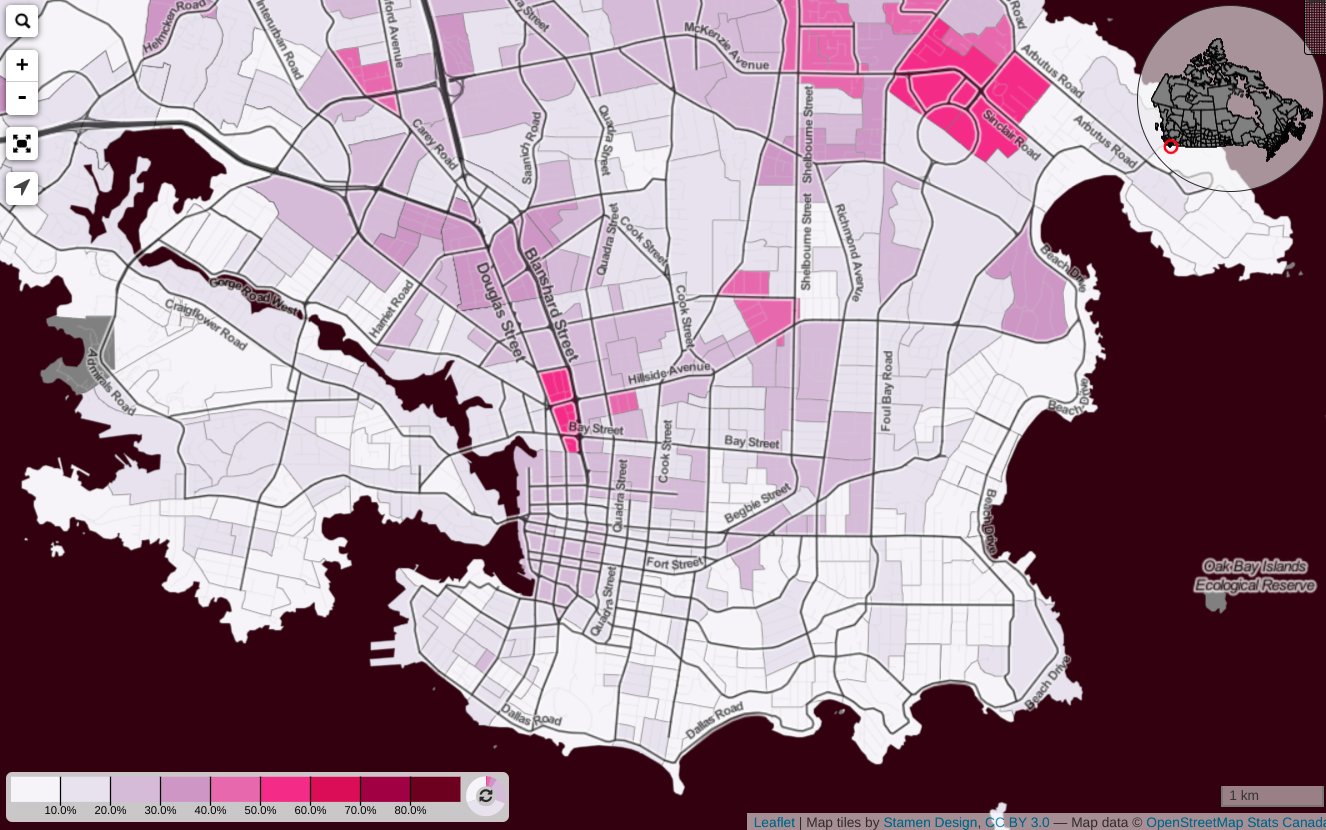 Since 2012, the City of Victoria has recognized that new park space is needed—especially in the downtown/northern neighbourhoods—to meet the goal of having a park within 400 metres of all residents. With many priorities competing for the limited resources, acquiring new land for parks has been understandably difficult. We’ll need to think creatively about increasing park space. For example, making more and better use of existing green spaces, working with developers to include boulevards, greenspaces, and gathering places into new developments, and encouraging community led place-making projects to enhance public space.

Neighbourhoods like Downtown/Harris Green, North Park, and Burnside Gorge are especially park deficient considering so much of these neighbourhoods are made up of commercial (Downtown), industrial (Burnside), or regional amenities (North Park). And despite having several parks in Fernwood, at 0.43 hectares per 1,000 residents, Fernwood is still far below (0.45) the City average of 2.65 ha/1,000 residents. 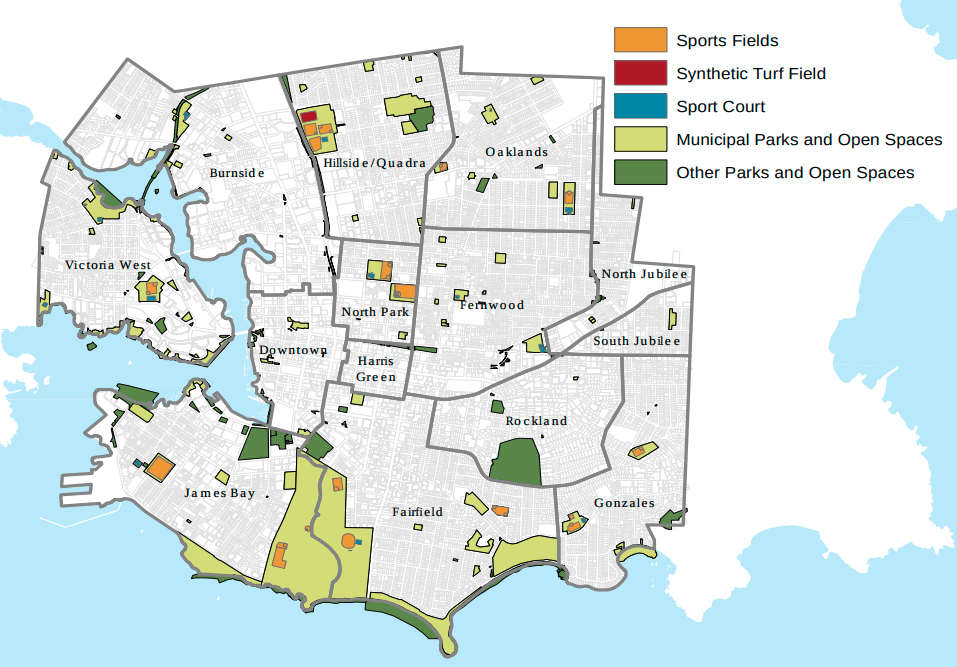 Location of Municipal Parks and Opens Spaces in the City of Victoria  as well as sport courts and fields. 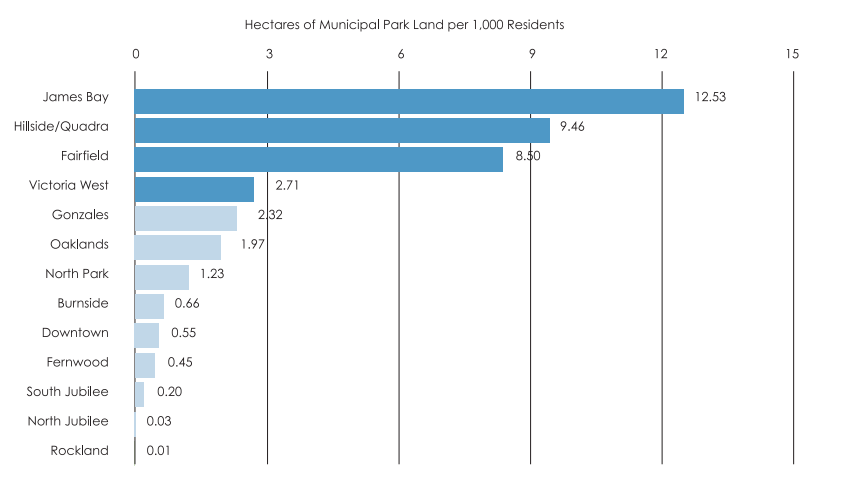 We are interested in work being done in the City of Vancouver using “initiative zones” to prioritize projects, programs, and resources so that the provision of parks and recreation can be more equitable.

See the City of Vancouver’s criteria for establishing the Initiative Zones.

What would it look like for you and your family if you had more access to green space? Would your physical activity and mental health improve? Would your leisure time look different?

To explore the topic of green space and our shared public spaces further, the NPNA is organizing a Jane’s Walk on May 8, 2022. During this event we’ll explore the neighbourhood, stopping at several locations along a pre-set route to celebrate what makes North Park unique, learn about local history, and think about the future of the neighbourhood. Everyone is invited! Watch our newsletter and social media for more information in the coming weeks.

Protect The Arbutus Trees of The Pacific West Coast

Tips For a Healthy Veggie Garden

Mapping the Heatwave in North Park